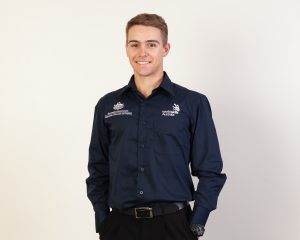 WorldSkills 2019 Skillaroo Anthony Cobb hopes to ‘hook a big one’ in Kazan this August!

Central QLD’s Anthony Cobb knows a thing or two about Electrical Installation­–so much so that he’s earned a place on the Skillaroos, WorldSkills Australia’s international team. The Skillaroos are set to compete in the 45th WorldSkills International Championships this August in Kazan, Russia. Crowds are anticipated to reach upwards of 250,000. Young apprentices and tradespeople from 66 countries will compete for gold, silver and bronze medals and the title of world champion in their skill.

Anthony will challenge 40 competitors in Electrical Installation, where most skills have an average of 30 competitors. It’s set to be an incredibly exciting and innovative skill to watch. When asked about the upcoming WorldSkills International Championship, Anthony said, ‘’I am very privileged and honoured to have the opportunity to represent my country in Electrical Installation. I am really looking forward to going to Kazan to represent Australia, and take great pride in wearing the Skillaroos uniform.’’

“We’re delighted to be involved with WorldSkills once again, which offers young people the best opportunities for a successful future, and are proud to be supporting our very own Skillaroo, Anthony Cobb,” says Ian Richardson, Chairman of the KNX National Group Australia.

“At WorldSkills 2019, Anthony and his peers will be able to demonstrate their full potential in dealing with future technology and thus lay the first foundations for a successful career. Everyone at KNX National Group is rooting for Anthony – best of luck to him and the whole Australian team!”