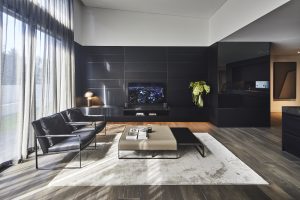 An ambitious Specialist Disability Accommodation project includes a suite of automated features that give residents control and independence.

Sometimes a name embodies the ethos of an entire undertaking. So it is with DPN Casa Capace: casa is ‘home’ and capace is ‘to be able’ or ‘having the ability to achieve’ in Italian, the root word of capacity. It’s the name of a social impact business incubated by property investment company DPN that is taking Specialist Disability Accommodation (SDA) in Australia to a new height.

As a company DPN is, says Managing Director Sam Khalil “fanatical about design excellence”. The idea of a social-impact enterprise was incubated within DPN’s existing core business of designing and building premium dual-income properties. Australia’s National Disability Insurance Scheme (NDIS) aims to provide for the 28,000 differently abled Australians who need SDA housing. Realising that NDIS care providers were better equipped to focus on their expertise, the government invited the commercial property sector to conceive SDA-standard designs to improve the dwellings, which have historically often felt more like hospitals than homes.

DPN Casa Capace was up for the challenge. “We wanted to create a designer home that anybody would walk into and say, ‘I would love to have this as my home’, and not to be able to tell that it’s been built as a disabled-care home in any way,” says Khalil.

When the pilot homes opened early this year, they were greeted with enormous enthusiasm from prospective residents and NDIS care providers, and institutional investors have joined with the original social-impact investors to help DPN realise the next stage of the Casa Capace vision.

Sam Khalil credits all his partners. “We made bold claims and all those partners took the leap to join us,” he says. “We collaborated on our strengths to deliver something that’s going to benefit Australians and set the benchmark globally. Within three months, we had $200 million of EOIs, we’ve already bought more land and there’s a pipeline of housing with a plan to build 1500 homes in the next five years, most in NSW but with Queensland and Victoria soon, too.”

Khalil knew the right partners would be critical for the success of the Casa Capace homes. They needed a high level of automation, which had to be secure, robust and intuitive to operate. Building technologies distributor Ivory Egg is proud of its reputation as a hub for leading and yet OEM-agnostic solutions. “DPN Casa Capace was looking for automation that wasn’t about bells and whistles, rather to affect change in people’s lives,” says Simon Harvey, National Sales Manager for Ivory Egg.

“We knew we needed a solid partner with a wealth of products that could do what DPN  Casa Capace required, and is big enough to do it at a roll-out scale,” explains Harvey. “We have a great relationship with ABB, so we looked no further than them – they have the expertise and the product.”

Harvey knew that ABB i-bus® KNX was the right solution for Casa Capace’s automation vision. “In the Casa Capace homes, KNX controls the electrical doors, the lighting, blinds, TVs and the HVAC, and even the height of the benches,” says Christian Schiemann, Market Development Manager for ABB Building Automation Australia & New Zealand. “It can also implement scenes, such as raising the blinds and switching on the lights in the morning, or turning on the TV and dimming the lights.”

The first two dwellings opened in Sydney’s Oran Park in February this year. “Casa Capace now has a future-proof design and system that can accommodate ongoing development of technologies and products,” says Harvey. “It’s designed to enhance the longevity of the homes. ABB is synonymous with KNX, and this open-protocol standard is part of the allure for DPN – they’re not locked into any one technology.”

On the opening day of the pilot homes one of the inaugural residents, Ricky, told Prime Minister Scott Morrison that he’s been confined to a wheelchair for a decade after a major stroke. Casa Capace is set to give him back some independence. “Although we did joke that his five grandchildren were going to turn the place into a theme park with all the new tech and height-adjustable benches when they visit him,” said Morrison. We predict that Ricky won’t mind a bit.